If you would be inclined to share a few measurements it might make my life a little easier! How much room is between the overhead and the cab? I noticed a lot of flex and nothing appearred to hit. Also what is the overall height and the height of the top of the truck frame rail to the ground?

Regarding the switch to singles, have you noticed any adverse affects? Have you driven in a cross wind with it since switching? I have heard of some handling issues on pavement in windy conditions with singles and since you have driven both you might be able to clarify that a bit.

Hi Mark,
great questions. Hope this answer is not too late for you, we’ve been in the Wilderness First Responder course for the past two weeks, and have had very little time for anything else.

Now that we have put the truck through it’s paces off-road, I’m more confident in giving out these dimensions…

The gap between the top of the cab and the camper’s cab-over room is about 4.25″ – the cab’s roof has a crown in it, and there are strakes for strength, but at its minimum point, it is 4.25″ We have never hit, and as you can see in the video, we have seen that cabover bouncing quite a bit.

The top of the chassis frame rails are 48″ off the ground. That of course changed with the new tires, and varies based on the air-suspension, but on flat level ground, it is 48″

The distance between the frame rails and the bottom of the camper (i.e. – the thickness of the “dynamic mount”) is also about 4″

Speaking of which… there was a LOT of discussion around that dynamic mount when we first designed it. As you can see in the final few seconds of the video, there is a tonne of flex in the mount, and the the camper really does move independently of the cab, keeping the box nice and square. (inside the camper there are two longitudinal walls that really help stiffen things up too!)

HOWEVER… if anything, it is floating too much. Once it starts swaying it gets a bit of a pendulum effect and swings back and forth. A light touch on the brake for a couple of seconds slows everything down and it settles, but on the highway it can get a little hairy.

My intention is to now revise the system by putting a couple of heavy/adjustable shock absorbers mounted on an angle between the chassis rails and the camper. This should allow it to still float, but slow it down a bit. I believe Doug Hackney had something similar on his venerable 3-point mount.

I also heard about a mount on a UniMog that essentially used ratchet straps to lock down the camper to the frame when you don’t necessarily want it floating (i.e. on the road) – an interesting approach that I might still look at.

For those who have been following along, we switched from 41″ dually Michelin XDE M/T’s:

The difference off-road has been HUGE.

The new tires have a massive footprint, that becomes even more massive when we air them down. We normally run them at 110 – 120psi, but in the desert we had them as low as 35psi with no problems.

They were extremely pliant on the rocks, and floating nicely on the soft sand. (they sunk about 3/4″ into the sand, which considering we weigh 34,000lbs is not bad!)

HOWEVER… (there’s always a however!) the performance on the road takes some getting used to. They are not loud the way my Jeep’s Simex Centipedes were (which was my biggest fear), and they ride quite smoothly. Mileage has not suffered very dramatically, and aside from the speedo recalibration of moving to 46″ tires, there hasn’t been much difference, except….

They “stray” – quite a bit. The first time I drove across Texas (west to east) with the duallies, you could pretty much set the cruise control, use a bungy cord to tie off the steering wheel and go in the back for an hour to have a cup of tea.

On the way back across Texas (east to west) with the XZL’s the experience requires constant concentration and several white knuckle moments. You are constantly adjusting the steering wheel slightly, back and forth to keep in your lane. If you look away for a while you can easily find yourself in the next lane, which hopefully does not contain a Honda.

Now that we’ve put some mileage on them, I’m going to get the alignment checked, and I’m thinking about adding another leaf to the front suspension, which seemed to help last time when we first loaded it with the camper box. I’m thinking that with all the interior and fluids the front could maybe use another boost to aid the geometry.

On a dirt road though… they are fantastic. With even a little bit of air out, and the air-ride on the cab, road corrugations create hardly a murmer. It helps to be very big…

We are off to Aspen this weekend, then Grand Junction, CO, Yellowstone and Montana. We will then be going to Seattle and Vancouver, before really pushing north for Alaska in August.

We’d love to catch up with any of you if you’re along that path. 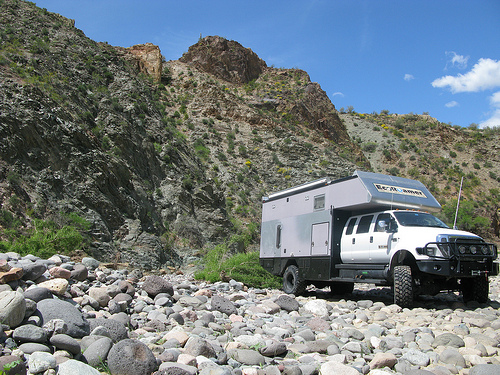 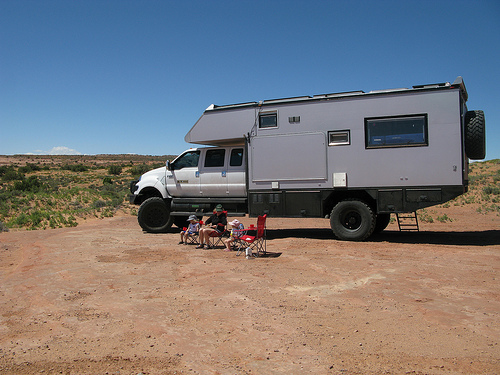