On The Road Less Traveled / Build Posts / Moving Inside

This week marks a fairly epic milestone in the development of the truck. We’ve started installing the interior!

The major work over the past two weeks has been the pop-top and the electrical. (both of those now link to the newly organized photo galleries)

The pop-top was a bit of a scary affair. Any day that you wake up in the morning and take a sawzall to a perfectly good truck makes you feel a little nervous…

The overcab area is where the kids are going to have their two beds. But in order to keep below the self-imposed 13 ft height restriction, and wanting to leave enough room between the truck cab and camper to allow for sway, meant that the actual over-cab area is pretty tight.

So we designed the truck with a pop-top. But left it until one of the last things to do, so that we had a stiff & sealed truck for our side trips over the past year.

Here’s what the over cab looked like at the Overland Expo in Arizona:

Then we got back to Sturgis and did this to it: (gulp!)

Then we started framing in the pop-top. It is has a double wall system (interior, exterior) that overlap so that there’s never a gap to the outside:

The big beefy side beams you see, extend back 10ft into the camper to give the overcab a nice solid support:

Finally we used the original cap, with a new rolled nose cone for the clamshell. Here it is in place: (don’t ask how they got it up there)

And here’s the HUGE piano hinge holding it on:

From the front then, it will look something like this:

…but the real challenge is not the front, it’s the back.

There is a big gaping hole back there and we spent a couple of months going back and forth on different ideas on how to seal it up. We thought about:

…then I had an idea. What if we take a fire-truck / service-body style ROM roll-up door, where the track is usually stationary and the door rolls up. And reverse it so that the door stays stationary but the track is the part that moves?

The guys at ROM thought we were crazy, especially since the door we want is 100in wide. But after months of back and forth, they built it, we installed and IT WORKS!

Here it is getting install in the new tracks:

The bottom end of the door is fixed to the main camper roof.

The top end of the door slides up parallel to the pop-top roof when the top is down.

As you raise the top, the door stays put and slides into place as the rear wall.

What’s beautiful, is that you can release the bottom if you want to and slide the whole thing up to create a massive (screened in) window, which should scoop in a warm summer breeze. (if you park the camper in the right direction!).

The whole pop-top is assisted by 2 x 500lb gas shocks, so when you release the latches and push it up the first inch, it then slowly rises under it’s own power. No motors, no chains, no worm gears. Lowering it is a 30lb pull down from the inside.

Each aluminum slat in the door, (hollow) can be filled with foam insulation if we think it needs it once we’ve tried it.

On the roof is a Heki 2 Skylight (accessible only in the up position) and the 8th solar panel.

I will post up some shots of the pop-top fully skinned and with the door down as soon as I can.

In the mean time, after two years from when I sketched the pop-top, and months and months of struggling with it’s design, I’m delighted that it works! I don’t think there is anyone else in the camper industry that has built something like this. (there may be a reason why, which I just haven’t figured out yet!) 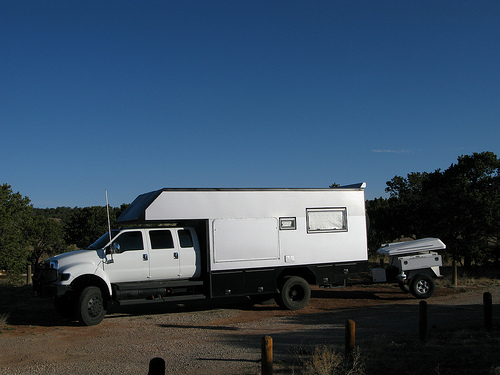 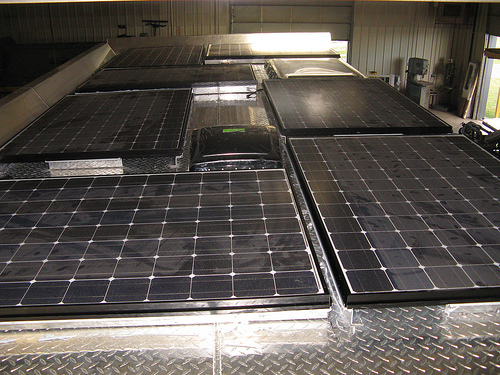