On The Road Less Traveled / Build Posts / On my Way!

My apologies that it has been a while since the last update. A LOT has happened, and it has been a crazy past few weeks trying to get the truck ready for the big trip to Arizona for the Overland Expo.

If any of you are planning on going to the OvExpo, be sure to stop by and say hi! We’d love to meet you and show you in person what I’ve been blathering on about for months in these posts…

Not everything has gone according to plan, and I’d be lying if I said that “we’re there” – read below and you’ll understand… BUT, in the mean time, this is my very first ExPo post that I am writing FROM THE TRUCK! I am sitting in “my office” working on my laptop with the truck WiFi, and some nice Cowboy Junkies music playing on the stereo to drown out the sounds around my Boondocking here in St. Louis.

Here’s my route to the show, keep your eyes open for us on the highway!

OK, so what happened?

The Generator is installed:

Except, it’s not working because we ran out of time and didn’t plumb it to the diesel tanks…

ELECTRICAL:
I started on the wiring and the electrical cabinet is in:

[MORE PICTURES TO COME AS SOON AS I HAVE BANDWIDTH]

Except the guys installing the new dual fuel-tank guages disconnected the old guage/sender not realizing that it controls the pump which moves fuel from the left tank to the right tank (strange way to balance the system) causing the engine to only draw from one tank, leading to them running it dry and a $300 bill for CAT to come out and get the truck running again. (I was in New York, or I would have primed the fuel pump myself)

However, Leon & Steve over at Home & Mobile Energy (who are in charge of the solar) did a fantastic job starting the work on the cabinet. They got the 2 Outback 2kW inverters installed, the charge controller, and the Transfer switches (2 of them so we can take either 50Hz or 60Hz to be ‘globally ready’) The 8 Lifeline batteries are also installed. That battery bay is crazy. I’ll upload photos of it as soon as I have bandwidth again…

Also, the LED lights are here, but they missed 7 of them from the shipment, and we can’t put them in until the ceiling is in, which we can’t do until we insulate… so no mounted lights for this week!

Here’s the lights though, they’re fantastic:

By that point, Alice came out with Maya to meet Kurt and I. We went over to see Matt & Bill at Michiana Laminated Products who are building all the cabinetry.

Bill and I have been working on the designs in AutoCAD for months, but nothing replaces some practical time with tupperware and adjusting shelves:

We changed the latches, to these great SouthCo ones from Austin Hardware, they PULL the door in tight when they latch, which gets rid of any rattles. Very nice!

That also shows the recycled MDF board.

Here’s a shot showing how over-built all of these cabinets are, to deal with the vibration of off-roading. The guys there have done a fantastic job:

…except, that we missed the deadline… The bamboo faces need to be treated for 1 week before they can be put in the truck, and we missed that window. It’s not worth putting everything in the EcoRoamer, and then pulling it all out again (scratching it up in the process) – and so we’ll have no interior for the Overland Expo. I’m REALLY bummed about that fact, because the cabinets look amazing and I wanted to show them off!

One thing that did kind of work out this past week, was the Fibreglass Sand Ladders that I ordered from Norm Klapper at PEC Boulder (Thanks ExPo forum for that connection!)

Somehow, Norm lost the order, and so I thought we were going to miss that window too, but he took good care of us and made sure we got the custom size ladders in time. I sprayed them black, and built brackets for them on the front of the camper:

They seem pretty heavy and amazingly strong, so we’ll see how they hold up.

Unfortunately, the box broke in the mail from WWW, and so one of the cartridges was smashed. Here’s what it looks like in the rear bay though:

This system deserves it’s own post some day with the details, but in short:

Lot’s has happened since then, including:

Unfortunately, I have almost zero UPLOAD speed here, so I’ll save all those for another night…

See you guys in Arizona! 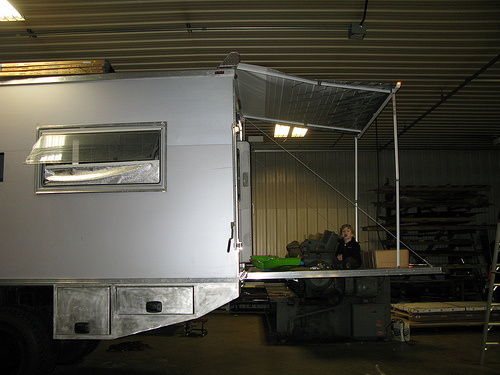 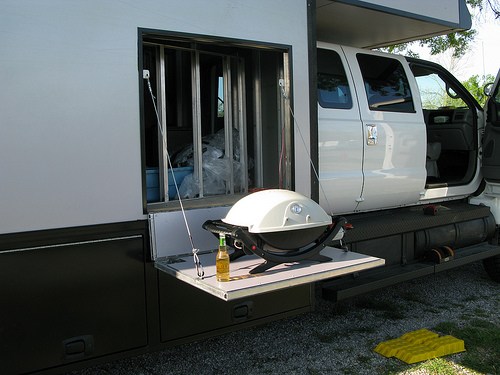