On The Road Less Traveled / Build Posts / In The news…

The New York Times ran a story this week about a few other examples of people working on eco-friendly camper ideas. Most of them are conversions of existing RV’s using veggie diesel.

Still, an interesting read and very encouraging to see other people starting to create this trend.

We’ve been very excited about the prospect of EcoRoamer like vehicles on the trails someday, exploring nature without destroying it at the same time…

By LINDA BAKER
OVER the last few years, Sara and Matt Janssen have been downsizing their life. First, they moved from a 1,600-square-foot home to a small apartment in Montana. Then, wanting to tour the country without harming the planet, they took up residence in a recreational vehicle fueled by used vegetable oil.

They now travel with their 4-year-old daughter, Bella, spreading the word about the sustainable life.

Recreational vehicles, which get about 8 miles a gallon, are often considered the antithesis of low-impact living. But it doesn’t have to be that way, said Ms. Janssen, speaking by phone from her home, a 36-foot, 1998 Western Alpine Coach, when it was parked in Des Moines recently.

Their motor home has a hot water capacity of only six gallons, “so I know how long my showers are,” said Ms. Janssen, a 31-year old photographer who also works for her father, a developer of franchises for Cold Stone Creamery. The RV’s limited space also means “we can’t buy anything because it won’t fit,” she said.

Add to that a comprehensive remodeling, including nontoxic paints, bamboo floors and the waste-grease fueling system, and the Janssen mobile home “is a self-contained lifestyle,” Ms. Janssen said.

Amid growing interest in alternative-fuel vehicles and environmentally friendly building methods, a handful of designers and do-it-yourselfers are taking on an unlikely challenge: reinventing the motor home, with a goal of transforming the typical wide-body gas guzzler into a model of compact green construction and fuel efficiency.

These modern-day RV owners are using their retooled motor homes as vehicles, literally, to promote ecological awareness as they travel.

“If you can make an RV sustainable, you can make any industry sustainable,” said Ty Adams, a Portland, Ore., resident who spent 2007 visiting 25 states and promoting renewable energy in the BioTrekker, an RV powered by biodiesel, a fuel made from refined vegetable oil. Mr. Adams spent $108,000 for the RV and $12,000 more for the biodiesel upgrade and campaign, which he financed by selling his house.

The trend received a boost a couple of years ago when Willie Nelson began powering his tour bus with biodiesel, which he called BioWillie, and later convinced other musicians to do the same. But regular RV owners say that their tours serve another purpose besides sustainable travel, namely to reflect a desire for a simpler, if not entirely bygone, era of road tripping and nature appreciation.

“When people talk about conservation, they get so bogged down with recycling and living lightly they forget what they are trying to save,” said Brian Brawdy, a 47-year-old former police investigator turned wilderness expert. “I want people to get out there and camp, hike, rock climb.”

Mr. Brawdy, a spokesman for Gore-Tex, is on a self-described — and self-financed — “Wonder Explore Believe” tour of the United States in a Lance Camper modified to capture rainwater and use wind and solar energy.

Although hybrid and alternative-fuel RV models have yet to find a mass market, the industry is moving toward fuel-economy prototypes and environmental designs, said Kevin Broom, a spokesman for the Recreation Vehicle Industry Association, which is based in Reston, Va. Individual RV owners are leading the way, he said. An industry survey conducted last year found that about 18 percent of RV owners are already using solar panels, Mr. Broom said.

“As consumers ask for more green elements, manufacturers will definitely respond,” he said, adding that some of the luxury RV models are already replacing ubiquitous vinyl interiors with hardwood. “It comes in on the high end, then works its way down. ”

Mr. Adams is taking another approach after his BioTrekker experience. An avid mountain climber who grew up in Montana, Mr. Adams, 30, described biofuel as his “gateway drug” but said: “Living in the RV for a year made me realize they are not built well. The focus is on whipped cream and faux finishes.”

So last January, Mr. Adams, a former editor for an RV industry publication, sold the BioTrekker and purchased a 37-foot 1994 Safari Trek — “which in RV years is like 1,000,” he said — and partnered with Joseph Treiber, a retired farmer, and Allison Hintzmann, a teacher, on a top-to-bottom environmental redesign. The fruit of their labor is called the SolTrekker, which is painted in Tuscan reds and yellows and includes solar-powered water and electrical systems, a composting toilet, rainwater harvesting system, recycled denim insulation, LED lighting and bamboo interiors.

Shortly after the SolTrekker was completed in September, the vehicle was featured as part of an annual tour of green homes in Portland.

“Most RV-ers care a lot about the outdoors,” Mr. Adams said. “They just don’t want to sleep on the ground; they don’t want to backpack.”

Instead of demonizing RVs, the goal should be to improve their performance, said Mr. Adams, who ultimately envisions a hybrid electric motor home getting at least 50 miles a gallon.

Similarly, Mr. Brawdy, speaking by phone from Cleveland, said: “People RV because they like that sense of independence. I hope it communicates to energy independence as well.”

Over the last year, he has taken his rig to such remote areas as Death Valley and Zion National Park without worrying about plugging in because of his off-the-grid electricity sources.

Mr. Brawdy, who extols the benefits of reconnecting with nature — “dirt is in our DNA” — during appearances at sporting goods stores and other venues, said a bout of skin cancer triggered his interest in renewable energy sources. “I decided to look at the bright side and harness the power of the sun to protect natural resources,” he said, adding that a storm the night before yielded 40 gallons of water from the camper’s rainwater harvesting system.

He said most of what he knows about the camper’s wind turbine and solar panels has come from on-the-road experience — a fact he hopes will encourage others to emulate his example. “I thought I could show the world: ‘Hey, Brian doesn’t look like the sharpest knife in the drawer, so maybe I can have a rig like that, too,’ ” he said.

Others have hopes of taking the environmentally friendly RV much further. Alexandre Verdier, a 35-year-old from Montreal, has designed a prototype camper that includes a diesel hybrid engine and solar panels that are controlled by a global positioning system to capture the maximum amount of sunlight. The vehicle is an update of the classic Volkswagen Westfalia camper van, which was synonymous with the counter culture in the 1970s.

“I did a lot of trips in the Westfalia, so I came up with the idea of a new green version,” said Mr. Verdier, citing as particular inspiration a three-month trip he took with friends around the United States when he was 17.

The design for the Westfalia Verdier won a 2006-7 Innovation for New Mobility prize awarded during the Caravan Salon Düsseldorf in Germany, one of Europe’s largest caravanning exhibition and trade shows. Mr. Verdier said that he was negotiating with a manufacturer and that the vehicles, with an estimated price of $129,000, should be available next summer.

Even for those RV owners already on the road, being a pioneer has its challenges. To fill their 100-gallon tank with used cooking oil, Sara and Matt Janssen scour the landscape for fast-food and mom-and-pop restaurants willing to give away an increasingly valuable commodity. The fueling process itself takes about an hour, Ms. Janssen said, adding that the couple invested in an on-board oil filtration system, which strains the “batter and chicken chunks” before the oil reaches the engine.

It’s a laborious process and “not soccer-mom friendly,” she said.

The Janssens’ current home represents a sort of second chapter to their journey. When they began their trip in September 2007, a venture that they called the Live Lightly Tour and that they documented at www.livelightlytour.com, they were traveling in a 1994 Fleetwood Flair.

Having traded up to their 1998 Western Alpine Coach in September, they figure that they have traveled about 20,000 miles in all and resorted to diesel fuel just once, outside of Austin, Tex.

“It was our fault,” Ms. Janssen said. “We didn’t start looking early enough.”

She estimates that they saved about $25,000 using the kitchen grease instead of conventional fuel. “We wouldn’t have been able to do the tour if we had had to pay for gas,” she said.

Although the family will live in Bozeman, Mont., for the winter — in their RV — they are contemplating whether to continue the road trip next spring.

But their work, and their old RV, lives on. Last April, the Janssens spent a few days in Plano, Tex., with Jeff and Kim Harrison, who had been following the Janssens’ tour online. The Harrisons, who have a 3-year-old son, Parks, were inspired to buy the Janssens’ original RV and start preparing for their own trip on the road next spring. That means storing used vegetable oil in a 50-gallon barrel as they find it, and testing the RV on weekend trips to visit family in West Monroe, La.

“To be able to travel and not take up more resources than you have to — this is a great way to have it all,” Mrs. Harrison said. 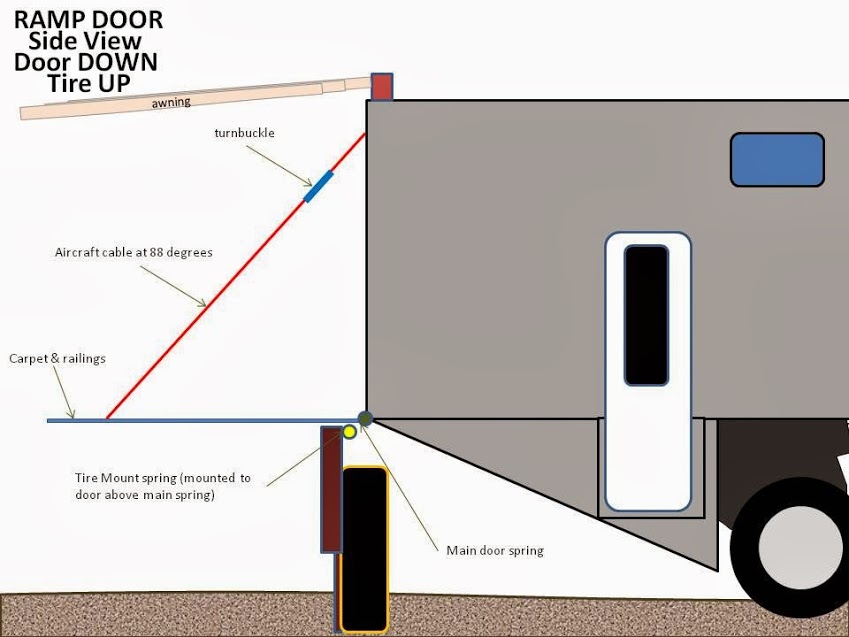 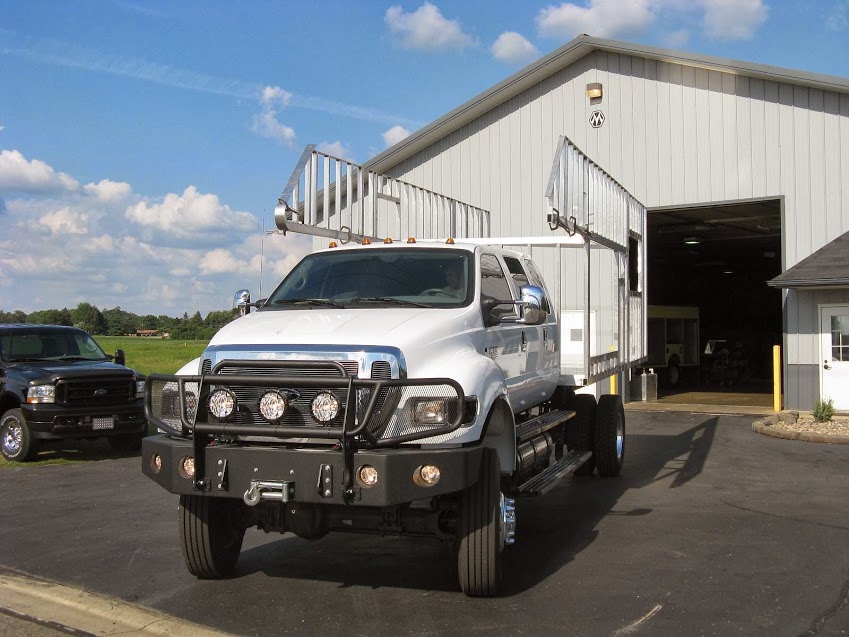