To attach the sheets we use 3M double sided tape. We got the idea from an aluminium, double decker, prototype train we were asked to build for one of the rail mobs here. Apparently it is widely used in the train industry to attach the sides of the trains. It is very simple to apply and once it goes on there is not much chance of it ever coming off. It allows us to build the trailers without any holes for rivets in the sheets for water to leak in past. Well at least in the middle of the sheets, we still rivet the corner capping on using structural rivets.

We took a very similar approach. The Alucobond is attached using a BASF single-part “Degabond” adhesive that comes in caulking-type tube. It goes on easy and allows a bit of time to move the sheet around a little bit to get it exactly right before it sets.

Once it is set there is great torsional and separational strength. We played around with it on some samples pieces first and COULD NOT get them separated through all sorts of improper means.

Similar to yours, this one is used for Aluminum aircraft assembly.

So far it has held up with no problem – I’ll let you know in 10 years if it’s still doing the job! 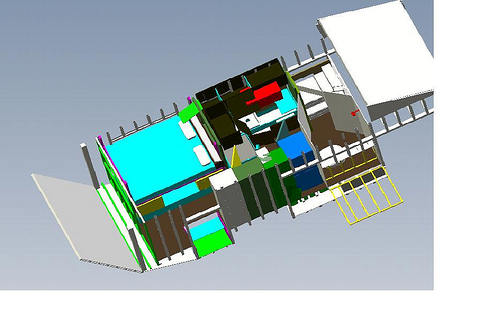