One of the more hotly contested topics on this thread (and ExPo in general it seems) is how to mount the camper body to the chassis. You want to ensure structural integrity (i.e. – it should come flying off with the wind resistance on the highway), but at the same time have enough ‘give’ built in to the mounting to allow the chassis to flex without cracking the camper box and everything within it.

Not an easy task.

I asked advice on this topic in this thread (see page 5) and got some great suggestions. Various people recommended:

One of the best suggestions though, came from Joaquim Suave who said:

But wouldn’t it be wise to get your body mods finished & 4×4 driveline in, then….

Test just how far your frame flexes, then…

That way you will be able to accurately determine:

* The sweep of the cab-over part of the box, over the cab.
* The flexable “pass-through” connection between cab & box
* The most cost effective mounting system THAT WEIGHS THE LEAST.

I wonder how many “expedition” vehicles there are out there with elaborate mounting systems….Just so that the owner can say “NO! THIS IS NOT AN RV! SEE! I’VE GOT A 3 POINT MOUNTED BOX!”

I’d sure hate to see you throw good money after bad.

…and at the end of the day, I think he was right. (congrats JS you win the prize – a free bottle of Tequila) The F-650 chassis is already pretty rigid, much more so than a Mog I believe. The we went and ‘sleeved’ the frame with another L-bracket of serious steel, which has made it even stiffer. Like this:

So, at the end of the day – when I lifted up the truck 3ft in the air using a chain block attached to just one rear frame rail, the deflection between the two rails was only 1.75″ at the end, and .75″ at the front. Not a whole lot of flex. Admitedly, that’s without a camper on the rear, but still – pretty stiff.

I worked it through a dozen times with our engineer Jeff Kuhl (who is fantastic, btw!) and we decided on a wholly unorthodox mount, but I think it could really work.

We custom built tabs on the side of each frame rail. Then, attached to these tabs a long piece of bar aluminum, using Ford Upfitter standard rubber pucks both above and below the tabs to allow the bolts/bar some flex by compressing the rubber in either direction.

Then, we put another set of pucks, between the first row, and used these to space to a second aluminum bar that will fasten on the camper body itself. By spacing the pucks like this, the bars act like a leaf spring and have the ability to bow slightly under jounce giving additional play.

This is Jeff’s design, based on some work he used to do at Grumman. I’ve never seen it before, but the theory seems good and I think it could really work.

There is very little fore/aft movement (compared to the diamond) but then the frame is very stiff in that direction, so I’m less concerned.

What I like the most about this design is that it’s very simple & easy to engineer. We’re going to build the camper box frame separately and then attach and test it. If we’re not happy with how this mount performs, we can easily take it off and all we’ve really lost is about 3 days in the shop. Then we can start exploring substantially more complex mounts if we have to.

The total height raised from the frame rails to the camper box (as compared to just sitting it on top of the chassis) is less than 4″, so C.O.G. shouldn’t be too badly affected.

Anyhow, that’s our solution. As always I’m open to your suggestions/questions/feedback on it. 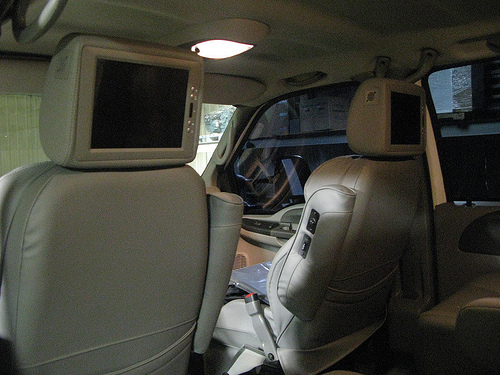 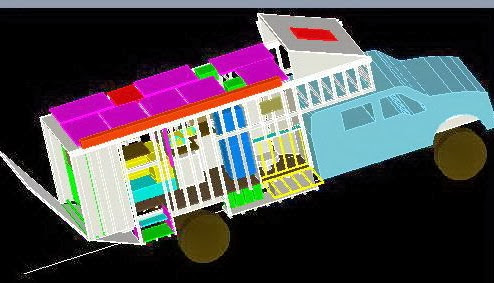