I know it has been ages since we updated the progress of the project, sorry!

Things are going well though and have been steadily moving along. We’ve pretty much been working on three main areas:

I originally had a guy helping me on procuring all the thousands of various bits for the project. Unfortunately he worked for the company that I was using to build the camper “Startracks” in Elkhart, In.

I had spent a couple of months researching the various custom builders and talking to various people about options. We felt that “bob” at Startracks seemed to have some good experience and some great people, so in the end we went with them.

…then he stopped paying their salaries. Then I visited his shop in In, and realized that it was an empty warehouse with no ongoing projects, and no crew. I quickly became ‘less comfortable’ and after some very brief sould searching decided to walk away and start again.

Luckily I had much of the documentation with me, but without my parts guy, I’ve spent much of the past 2 months piecing together all the components. In the end though I’m really glad this happened, because I have refined a lot of our parts decisions, I have an intimate knowledge of each component, and we’re saving a ton of money too…

I’ll write a dedicated post someday about just the various parts, and I think we might post the whole parts spreadsheet in the interest of the “open source” mentality that we’re trying to follow.

I’m really happy with how the designs are coming along. Every inch of space has been optimized now, and I think it is going to be really bright and liveable as well.

I freely admit that we have been ‘inspired’ by several fantastic expedition vehicles that we’ve seen such as:

Here is what it is looking like so far:

We are ‘over documenting’ it with the 3D CAD files, because I really hope that this will be of use to someone else someday as we are increasingly thinking of the EcoRoamer as a prototype for a sustainable open-source RTW expedition vehicle and not just a one-off.

While all that has been going on, the amazing guys up at Alton Truck in Michigan have been hard at work on the cab. (I highly recommend Larry and Nick there, they have been amazingly helpful)

In my earlier postings I showed the extended-cab doors going on. Now in addition to that we have:

a passthrough, for accessing the camper. Will be surrounded by a 5-15″ rubber bellows.

a flat floor in the cab. I always get scared when you put a sawzall and my truck in the same picture!

air-ride mounted under the cab, to smoooooth things out a little.

The interior is due to go back in again in the next two weeks.

The guys are also building a custom box for the next-gen 8.5kw generator on the driver’s side, and an auxilary fresh-water tank with a heater coil on the passenger side. (don’t worry, the rest of the plumbing and tanks will be within the cell, but we had an empty space and so are using it for extra capacity when not in freezing locales.)

That’s all for now. I’ll send more updates as the truck takes shape in the next couple of weeks. We’re hoping to start cutting metal on the camper starting April 15th so stay tuned! 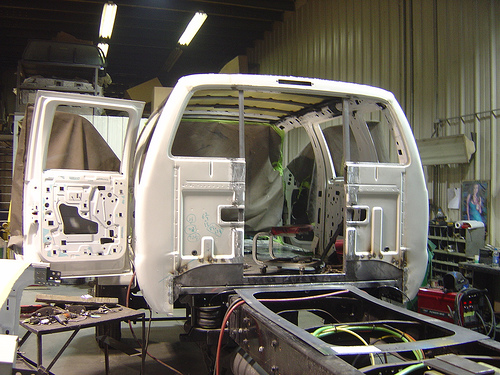