Charlie,
I agree that weight is a heavy issue on this one! (pardon the pun)

We are running the 365 MPT81’s in a super single format front / rear. We chose these because of two reasons:
1) Anybody I spoke to / read – who had run both XZL & MPT81, said that the MPT’s run smoother, straighter, quieter.
2) Michelin’s entire 20″ XZL stock for the next 12 months has already been booked by the USA Army for Iraq. We tried to scrounge together 5 pieces, but ultimately thought it a bad idea to commit ourselves to a tyre with limited future availability possibly.

No doubt, the tires will be our weakest point.

Here’s how the rest breaks down:

GVWR:
The truck is technically rated for 26,000 lbs from Ford
In addition to the axles, we’re reinforcing the frame (sleeved)
Actual capability???

STUFF:
I’m keeping a spreadsheet with all the crap we’re putting in to the vehicle, including furniture, the shell, and liquids. My current calculation puts it at: 19,000 lbs – which is probably wrong. Even if we up that by 33% it’s still 25,750 lbs — so I’m hoping that we should be ok!

No doubt it’s going to be a heavy beast though… 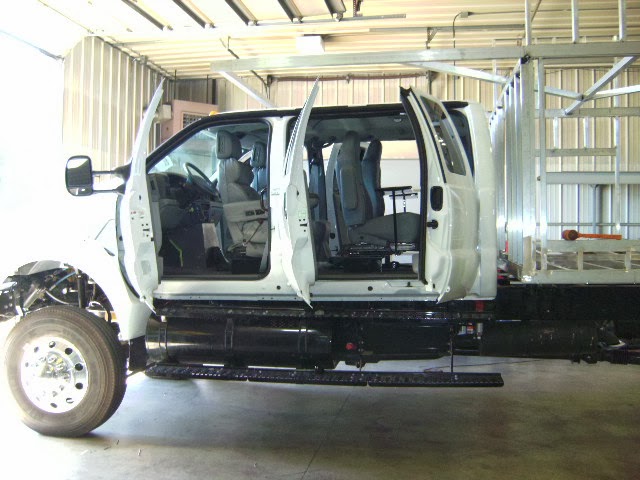 Plans for the cab...